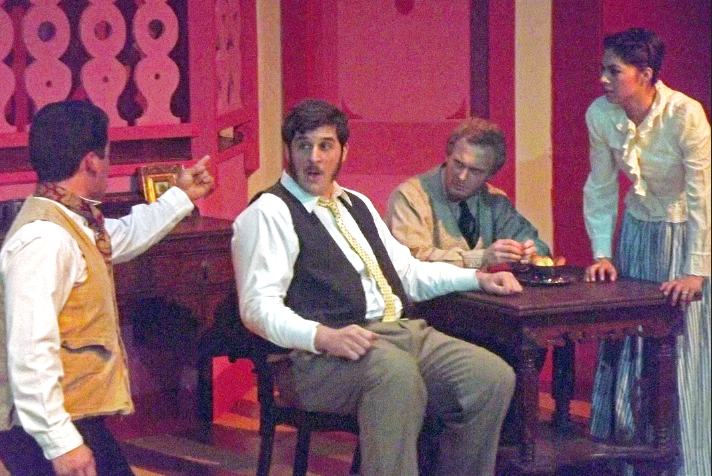 The story revolves around the main characters – a German couple, Theo and Louise Maske, who go through troubles after Theo’s wife Louise’s panties drop in public while trying to get a glance at the King during a parade.

The story takes place in Germany at Theo and Louise’s home.

In the story, the Maske family houeshold has a spare room they are hoping to rent but Theo is worried that no one will want to rent it after the public scandal his wife went through. But that’s not the main problem, a poet and a barber show up hoping to get the room with sexual desires for Louise after seeing her panties drop.

Theo’s character, played by student TJ Spadini, seems to not notice the problem going on in his own house. Both the poet and the barber rent the room just to be closer to Louise and to conquer her love. But Theo is too busy with other things to notice what’s going on.

Louise also seems to have a problem, she starts to feel neglected by her husband and tries to find comfort and love with one of the men that have rented the room.

The acting performances by the main cast, Spadini and Karen Hernandez, who play the Maske’s, were great playing their characters. Both actors looked very comfortable on stage and were able to pull off the act of a German couple.

The cast in the play was small, involving only seven actors total, but every actor shined through the characters they were performing. The supporting characters were; Gertrude Deuter (the Maske’s neighbor) and Frank Versati (a poet), played by Tiffanie Diaz-Moore and Neftali Jimenez, both did a fantastic job in their roles.

Neftali did a stellar job, performing with a tough accent throughout the play.

All the cast members did a great job with their performances and seemed comfortable on stage while acting through some tough material, including sexual scenes.

The comedy in this play hits the mark and had the audience laughing all night. The actors did a stellar job looking natural throughout their performance.

LMC Drama Instructor Nick Garcia did a great job of directing the play and helping the actors through all the nuances of acting in a comedy.

“The Underpants” is the most recent adaption of the 1910 German farce “Die Hose” by playwright Carl Sternheim.

Tickets are $10 for general audiences and $7 for students, children, and armed forces members.