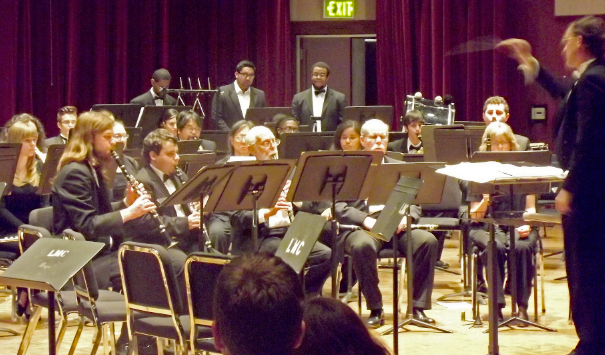 It was the first concert of the year for the LMC Concert Band, as they played three songs; “Colonial Song” by Percy Granger, “The Leaves Are Falling” by Warren Benson, and “Symphonic Concert March” by G. Bonelli. The NCCC Honor Band played “American Hymnsong Suite” by Dwayne S Millburn, “City Trees” by Michael Markowski, and “Danzon No. 2” by Arturo Marquez.

The Honor Band came together to perform the concert after only practicing for a few days prior.

The large band, consisting of over one-hundred total players and twelve LMC representatives, wowed the crowd with what they were able to accomplish in just a few short days. The finishing song, “Danzon No. 2,” which runs just short of nine minutes in length, was a ravishing finish to the concert as the swells of different harmonies blended together to form a uniquely entertaining sound.

“It was a wonderful experience working with the musicians in the Northern California Community College Honor Band. I am so proud of the progress that they made in a very short time. The musicality and spontaneity on the concert was all that I hoped it would be. It was a very memorable experience for me,” said Dr. Mitchell Fennell, the conductor of the Honor Band.

The LMC Concert Band also played their hearts out. Their closing song, “Symphonic Concert March,” proved to really showcase the talent the band has. Adam Truesdell, trumpet player in the LMC band, said, “I thought we did pretty good. Both bands were nicely blended and balanced. The room was full of power and intensity.”

The next concert is the LMC Choral Concert Tuesday, March 12, at 7:30 p.m. Tickets are $5 for general admission and $4 for students or seniors.