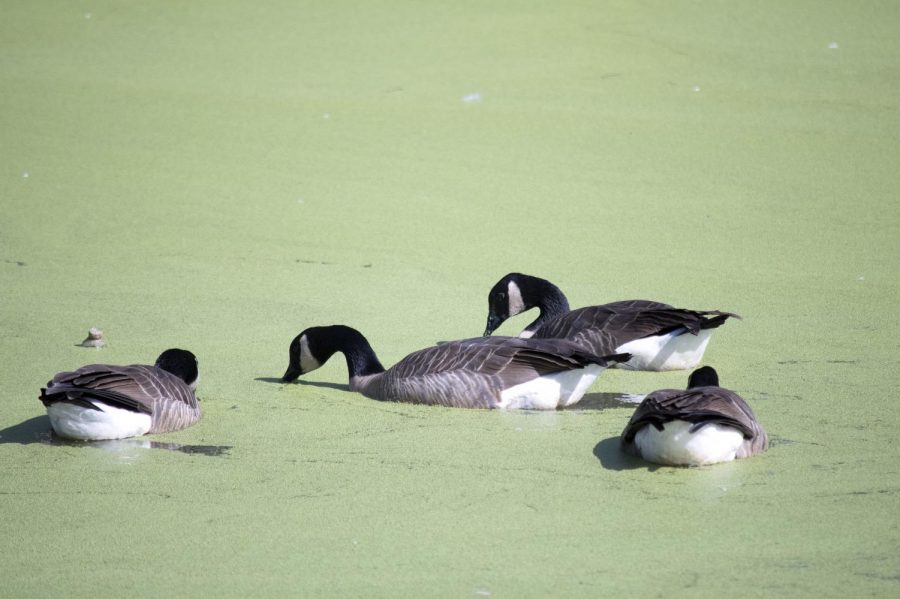 The nine-acre lake behind the cafeteria has been a staple of the Los Medanos College Pittsburg campus ever since the school opened in 1974.

Students and staff can be seen walking around the mile long paths that wrap around the lake on a daily basis. The geese that reside in the lake have become infamous at LMC, and both turtles and fish can be found living in the water as well.

People wandering around the lake often view their stroll as an opportunity to feed the geese bread and other foods.

“I’ve been feeding the geese a bag of bread with my kids every week since the beginning of the semester just for fun,” said student Jayna Domingues.

According to LMC Ecology Professor Briana McCarthy, LMC is home to both Canadian and Chinese geese, as well as other species of ducks and turtles.

McCarthy conducted a study with a group of students a few years ago that determined the geese at LMC have become destimulated by any human interaction around or with them.

“They [my class] found that the geese were highly habituated to all interventions. They didn’t care much about keys jingling, color papers being flashed in front of them…” said McCarthy.

As time has passed, the quality of the lake has consistently fluctuated. Yet in recent years, the pollution of the lake has been slowly increasing, due to litter in or near the lake, the feeding of geese and so on.

Despite this, buildings and grounds have been working to maintain the quality of the water to the best of their ability by implementing and aeration device that aerates the lake 24 hours a day, every day of the week. The goal of the aeration device is to propel and push water up into the air, introducing more oxygen into the lake.

“The problems we face with the lake are always changing and we have to constantly change our approach to maintaining the lake,” said Buildings and Grounds manager Russ Holt. “Right now we are experiencing a lot of duckweed. This duckweed is just a plant, possibly carried by birds, that floats on the surface of the water.”

Not only is the lake currently afflicted with an increase in duckweed, but there is an increasing amount of litter that is polluting the lake.

“Our biggest challenge is keeping the trash in and around the lake picked up,” said Holt. “Trash and litter become much harder to clean up if it makes its way into the lake either by being dropped in or by the wind blowing it in from the surrounding area.”

Because the lake is open to the Pittsburg community, as well as students and faculty, it is more prone to litter and other human afflicted issues. Those individuals who feed the geese at the lakes are actually, unconsciously, contributing to the poor quality of the lake water and decreased health of the birds.

“Geese that are fed human food suffer from poor nutrition, but they also tend to feed and poop in the same area. Whereas normally, they would forage for food and move around while doing so. This can increase risk of infection not only for the birds, but also for humans coming into contact with the water. Geese that are overfed will also produce more excrement, which leads to increased nutrients in the water, which causes algae blooms. Plus, more bacteria,” explained McCarthy.