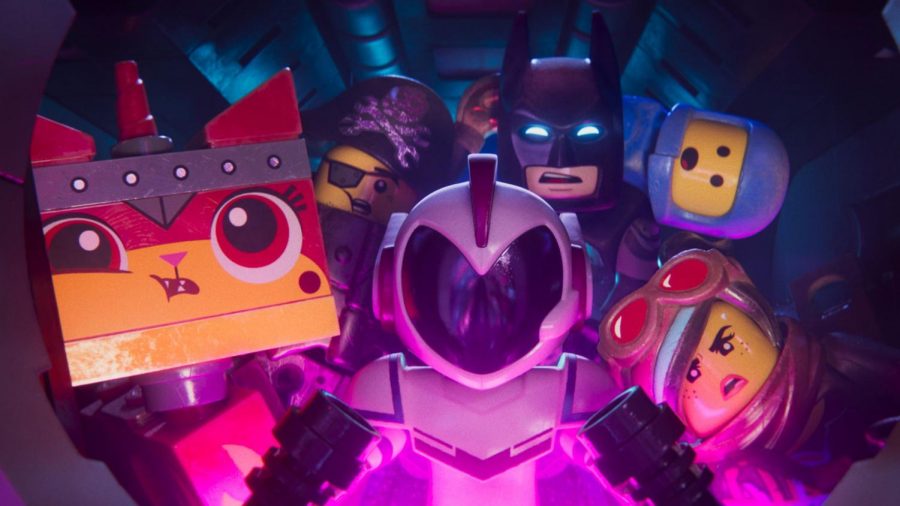 Unikitty, Metalbeard, Batman, Benny and Wyldstyle all pack into General Sweet Mayhem’s spaceship for a wild adventure in the “Lego Movie 2: The Second Part.”

The sequel to the “Lego Movie,” “The Lego Movie 2: The Second Part,” premiered back on February 8 but honestly, the movie feels a couple years too late.

The film follows the story of a lego figure Emmet, played by Chris Pratt, an ultra-optimist and the protagonist of the last movie, trying fit in a world where everyone around him has began to see the world as dark and bleak while he continues to try to be optimistic.

It is not a great sequel or really a great film in general. While the movie was not as good as its predecessor, it is something many who went to see it in theatres believed was worth paying for.

Most of the cast that appeared in the first movie are back and they performed on par to what they did in the original. Will Arnett’s “Batman” is the best part of the whole film, as he encapsulated all of the narcissism and brooding nature that people love about Batman. Pratt’s delivery as the lovable goofball that is Emmet was also well done, but Batman ultimately took home the gold.

The musical score for the movie was as appealing as the last, but failed to improve upon the previous movie. There’s not a single new song introduced in this sequel that will become as popular as the “Everything is Awesome” song that was featured in the first “Lego Movie.” Most of the songs will likely be mostly forgotten by the time the movie is over.

Most of the twists in the “Lego Movie 2” aren’t particularly stunning either and may seem like a simple rethread of the twists introduced in the last movie. Most moviegoers who did see the first movie could glean one of the biggest twists in the sequel, even if they only paid it the slightest bit of attention.

The comedy is also a disappointment. The writers seemed to try their best on the jokes and tried to get the audience to laugh but doesn’t get the reaction they were trying to elicit. Though there are jokes in the movie that would probably cause some to at least chuckle, a lot of the humour for the most part falls flat.

Storywise, the “Lego Movie 2” paces a lot of the same ground its predecessor did. Many of the characters repeat the same tropes and character developments they already covered in the last “Lego Movie” film.The basic problems Emmett had to contend with throughout the film, feels  very familiar especially to those who saw the first movie.

The “Lego Movie 2: The Second Part” truly does feel a few years late. The movie seems like a rebuke of pessim that had taken hold of a lot genres, particularly the superhero genre for a time, but has since faded.

In the end, the movie the movie is subpar, but good enough to leave most people content after having watched it.