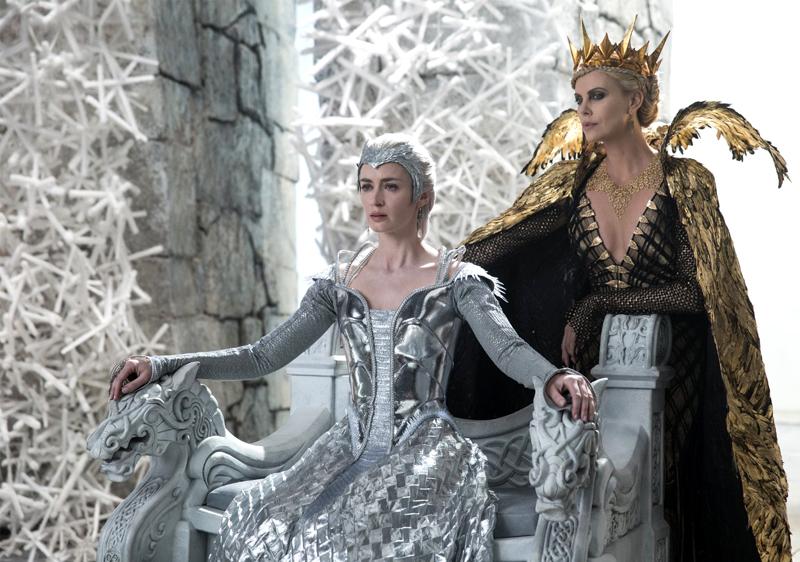 “The Huntsman: Winters War,” prequel to the groundbreakingly boring ‘reinvention’ of the Snow White fairytale, “Snow White and the Huntsman,” although stunning visually, still left me with the same question: Why was so much money thrown into a film that’s only watchable because of the hope of catching a glimpse of Charlize Theron as the evil queen?

The movie starts off showing the origin story of Eric, the titular huntsman, an orphan-turned-child soldier and ultimate warrior badass by the evil queen Ravenna’s good-at-first sister Freya (Emily Blunt). Freya turns out to be evil and hates love due to her baby being killed, which is when she discovers she has the power to shoot ice out of her hands. Freya hates Eric (Chris Hemsworth) and Sarah (Jessica Chastain) because they go against her orders and fall in love. Freya tears the couple apart with her magic and then the movie skips to seven years later, after Ravenna has been defeated and Snow White is the revered queen. Eric and Sarah then meet again and team up to keep the insidious mirror from the first movie out of the hands of Freya and thus beginning their journey for most of the movie.

This movie is just plain cringe-worthy, confusing and hard to watch up until the last half hour or so when Theron finally graces us with her presence, and — while Hemsworth is a sight for sore eyes — the pointless brogue/Gaelic accent used by him and Chastain just seems forced and takes away from his role as a hunky, nonchalant warrior.

Speaking of forced — not even Chastain’s or Blunt’s acting chops can save me from my feelings of perpetual bewilderment after having seen this film. Even with the “Game of Thrones”/“Narnia”/ “Lord of the Rings” costume design, I still don’t buy Chastain as some kick ass action heroine. Nor do I buy the chemistry between her and Hemsworth, but I guess if you’re going to have a movie that needs a feisty lead actress with a Gaelic accent then she has to have red hair (cough, cough, “Brave”). As for Blunt’s role as the bitter ice queen, besides her epic wardrobe and bomb silver hairstyles, I couldn’t shake the nagging suspicion that she is somehow related to Elsa from Frozen because they’re nearly the same characters, minus the infanticide.

This movie attempts to explore plots left open from the first movie, but unfortunately forgot not to be dull and unimaginative just like its predecessor. How can a fantasy fairytale epic casually roll past the existence of fairies and goblins and instead focus on the kind of offensive CGI dwarves (Nick Frost and Rob Brydon). I mean for one, the goblin fight scene was one of the only cool things about the movie, and two you’re telling me that the casting director couldn’t find a little person with the comedic acting ability that Frost, Brydon and the two other female dwarves — who, according to the movie’s running joke, are supposed to be hideously ugly — have?

The plot that should have been explored was the mirror’s origin and what it actually does.

The movie isn’t all bad — it still has exquisite visuals and an Oscar-nominated costume director. There’s still Charlize Theron who does a fantastic portrayal of being super evil. And of course, my favorite part of the movie was the complete non-existence of Kristen Stewart.

There are some things that I’m not sure are good or bad, like its hint at another sequel focusing on Ravenna’s character who somehow doesn’t die. There’s also the over theme of the movie ‘love conquers all’, which I’m not sure is actually true according to the way it ends.