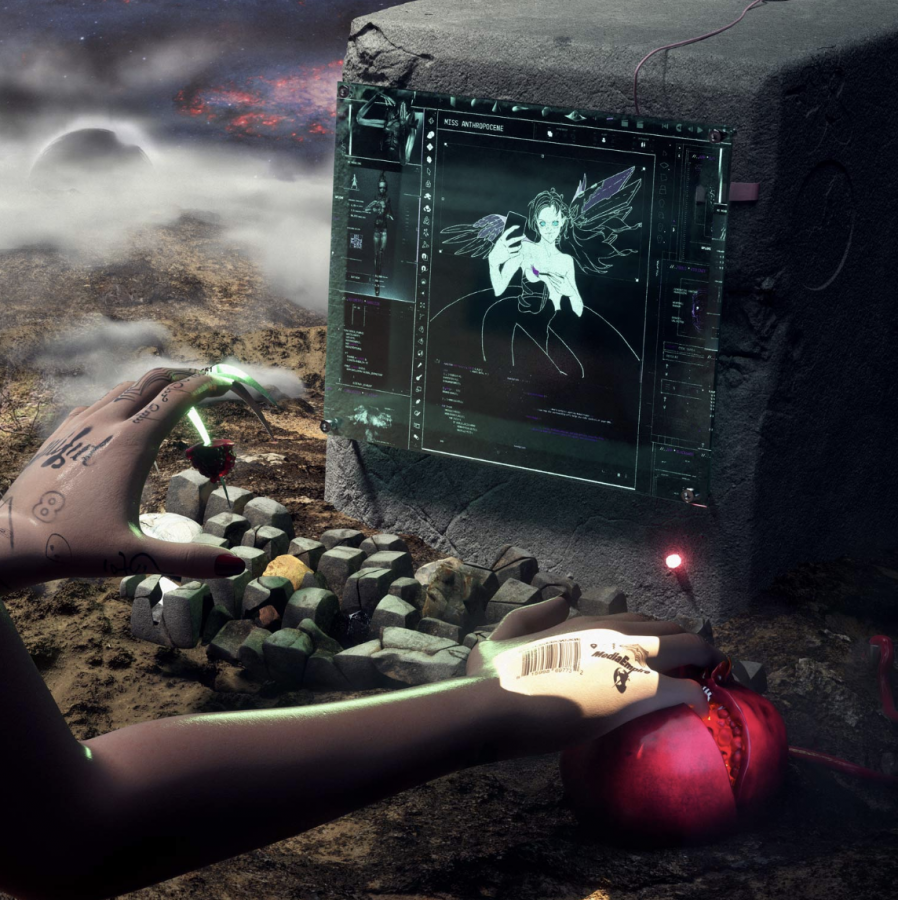 “Miss Anthropocene” is the fifth studio album by Canadian producer and singer, Claire Boucher, also known as Grimes. The album was first announced March 19, 2019, but due to the death of her manager and close friend Lauren Valencia, the album was finally released Feb. 21  this year.

With 10 tracks and a 45 minute run time, this album hits you with many different vibes. Grimes brings us into her dark world of villainy, death, pregnancy, discussions of climate change and much more.

The title, “Miss Anthropocene” is a supervillain alter ego Grimes created to portray herself. It’s a play on the term “misanthropy” meaning the hatred of the human species and nature and “Anthropocene” referring to the time period where human activity had become the dominant influence of climate change.

The album proves to be much darker than her previous albums, such as “Art Angels” from 2015, with nu metal and ethereal wave styles.

The first track, “So Heavy I Fell Through the Earth (Art Mix),” sounds as if you’re floating through space. It’s slow moving at first, then we’re immediately hit by her angelic vocals that guide you through the futuristic pop like beat.

The Google Neural Synthesizer in the track gives the song sounds of chaos. The line “Cause I’m full of love from you” makes you think she’s referring to her pregnancy and how it could be an out of body type of experience or the way she’s losing her power.

The second track, “Darkseid,” features the Taiwanese rapper 潘Pan, formerly Aristophanes, who raps and sings in Mandarin Chinese. Darkseid is one the most powerful Justice League villains, which perfectly describes this song. It’s one of the most intense tracks on the album and gets dark quickly. It’s a trap beat, a “banger” if you will.

You also hear soft howls in the background by both artists that make the track feel psychedelic. Then, 潘Pan delivers her lyrics fast and almost distorted, making you feel like you’ve crossed over to an anime dimension.

Grimes sings a spoken word style chorus, “Unrest is in the soul, we don’t move our bodies anymore.” This lyric seems to imply the idea of death. 潘Pan then bridges in English, “What does it take to be a survivor? Your death becomes part of the eternal pain of my body.”

The song ends with a loud jurassic type sound, perfectly capturing the dark, uncomfortable vibe Grimes seemed to want to bring to the table.

“Delete Forever” is the third track, a simple production that gives you a break from the rollercoaster ride that is the album. Her beautiful, more natural vocals glide over a banjo. This is the pop track of the album with a 90s or early 2000s feeling. Nonetheless, these lyrics are deep and depressing.

“Lying so awake, things I can’t escape. Lately, I just turn ‘em into demons. Flew into the sun, fucking heroin…” Grimes wrote this song about the loss of her friends to heroin overdoses and the death of emo rap artist Lil Peep.

The last track on the album, “Idoru,” is a totally separate feeling from the rest of the album. It’s a love song that opens with the sounds of birds and keyboards, bringing you back to reality and positivity. I think it’s a slightly random song to bring into this album, but not completely unexpected for Grimes to throw us off in the end.

“Miss Anthropocene” was worth the wait. It definitely needs to be listened to multiple times before you attempt to frame an opinion. Listen to it with good headphones or speakers because there are so many details worth pointing out. Grimes performed a true expression of dark times but, in the end, showed us how beauty circles back.