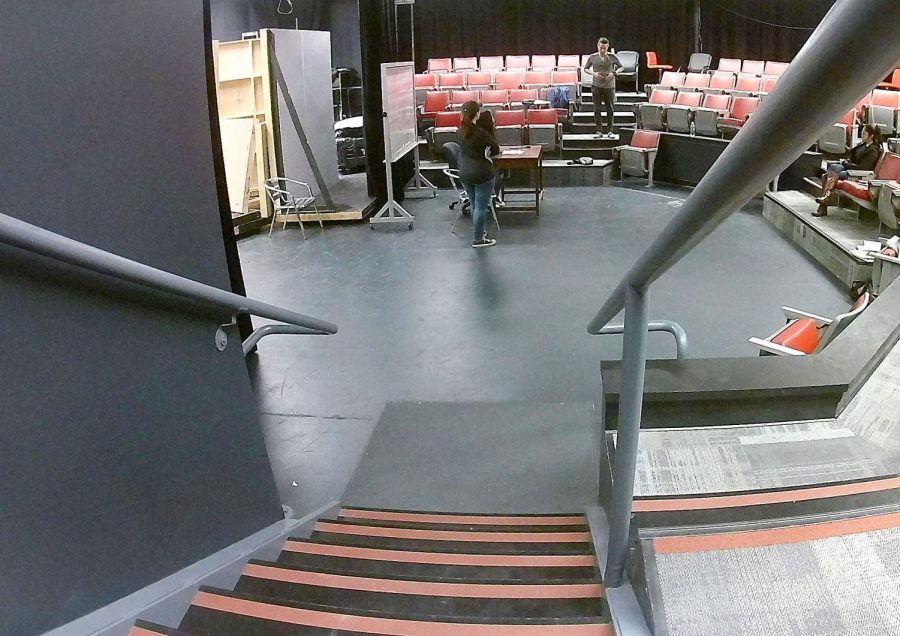 Students rehearse for the upcoming play "Connected" in the newly renovated Little Theater.

Tucked away on the third level of Los Medanos College, the Little Theater has hosted numerous plays over the years. Its walls have seen countless students come through its lair and bore witness to countless talented actors. With plush new seating and a more open layout, the theater has been refreshed and well received.

The Little Theater has a long history and is part of the original college that was constructed in 1974. Grand as the Little Theater may be and despite its rich history, a glaring flaw hounded the Drama department. The theater was not easily accessible to those with disabilities.

The American Disabilities Act, or ADA, was signed into law in 1990 by President George H.W. Bush. The law incorporated elements of the Civil Rights Act of 1964. Discrimination against disabled people included the more easily recognized ones; vision impairment, hearing impairment and others. But it also covered disabilities that are not so easy to recognize.

Conditions like Autism, Bipolar disorder and Human Immunodeficiency Virus (HIV). Discrimination was not the only grievance the ADA law addressed. The law also required businesses and employers to provide reasonable accommodation to disabled citizens.

The upgrades correlate to the theater’s debut, because LMC was constructed prior to this key legislation. Drama Instructor Nick Garcia noticed the lack of accessibility and went to work on fixing the problem.

Garcia reached out to department officials to address the problem. LMC officials were more than willing to assist Garcia in making the changes.

“ADA access played a big role in our update and I couldn’t have done this without the help of Nancy Ibarra and Kevin Horan,” said Garcia.

Additionally, other departments helped to accomplish the goal of retrofitting the theater. In addition to the ADA improvements, Vice President of Business & Administrative Services, Alexander Porter describes the other perks to the refresh. He notes the installation of a rocket booth in addition to the new upholstery. But he also noted the challenges of doing a renovation of any scale.

“There’s always challenges with a building that was built in 1974. Our construction team worked with our contractors to come up with solutions whenever encountered any issues,” said Porter.

With the updates complete, the theater not only saw its hallway reupholstered, but also new paint sprawled the walls that paired with new seating.

Drama student Greg Kubick-Boyd recalled the struggles of disabled theater guests. He noted how the old floor plan made it difficult for disabled guests to have a comfortable view of the plays.

“People in wheelchairs would be forced to watch the play on the stage itself and that can be uncomfortable,” said Kubick-Boyd.

With the renovations complete, the stage is now set for our most vulnerable guests to enjoy the performance.