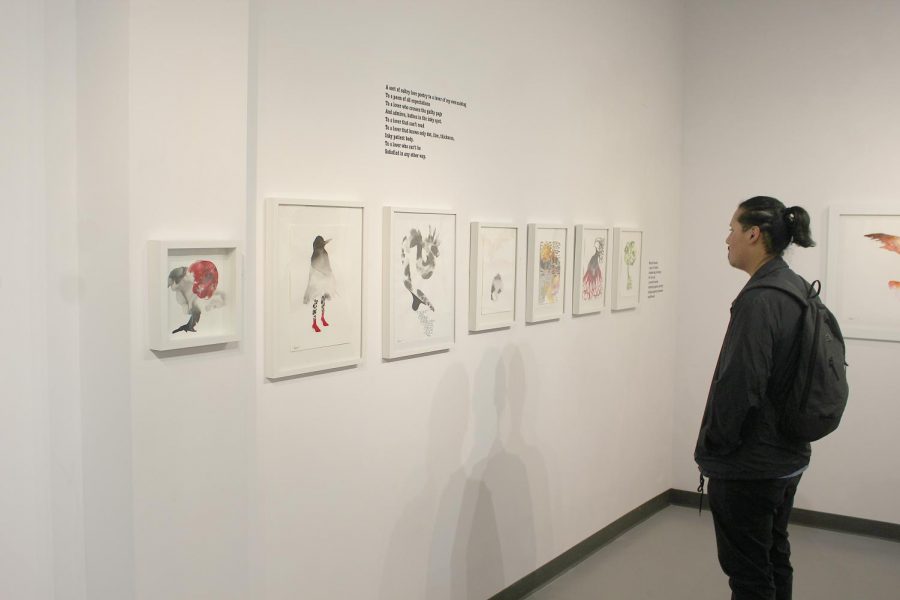 Los Medanos College unveiled a new art viewing by artist J Braman in the gallery located next to the library Thurs, Nov. 8. The artist spent a year in South America and felt the need to create after being a teacher for so long. Her experience as a Berkeley City College teacher provided much structure to her life and she wanted to shake things up.

Leaving her students for a year gave her time to think.

“If I did what I wanted to do for a year, what would it be like,” she said during the short artist’s talk.

To find out, she “decided to give time to herself” as well as time to work on this project.

Over the course of a year, Braman created over 500 pieces of art and in the LMC studio students have access to 40.

“I am delighted seeing my work,” said Braman with a smile on her face.

Throughout the year-long artistic process she discovered a lot about her own creativity.

“I learned that the studios hinder chances to actually see your work… Seeing them here makes it all more real,” she said.

J Braman’s art is considered an “art form in motion,” because it represents the “collisions in worlds and identities” and solidifies a person’s existence through art creations. Capturing movement and motion was intentional. “Animals are shown leaping” to represent her going from one idea to the other while capturing the essence of the South American rainforests.

Journalism major, D’angelo Jackson, was a first time art viewer at LMC and said he enjoyed himself.

Cool, calm and collected he said “So far so good… the art gallery has a nice vibe.”

He had no particular favorites in the show, but noticed how full the room was.

“Seeing the room full gives the show a different feel than when you’re passing by and it’s empty,” he added.

Computer science major, Gurjot Singh, and Anise Ghandchi stumbled in and wanted to partake in the art festivities for the evening at LMC. They were both captivated by the words on the paintings.

“The words made us love the pieces because they filled in the minor details that were missing when looking at the art,” Singh said.

Little did the audience know that the wording above the art took four hours to perfect in order for it to be presentable to art gallery viewers.

J Braman’s creations will be on display in the LMC art gallery next to the library until Dec. 8.