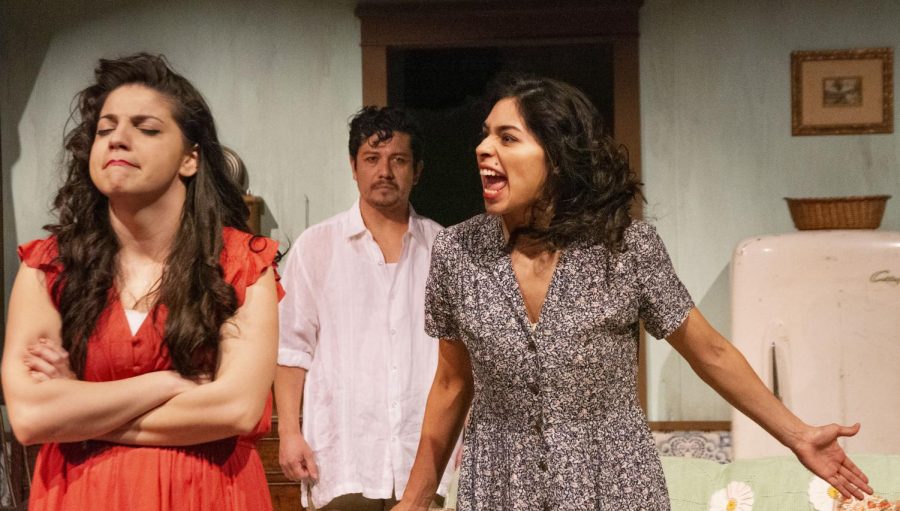 Los Medanos College’s chilling performance of “Two Sisters and a Piano” had the crowd roaring by the end of the second act.

The play, which ran from Feb. 27 through Feb. 29 in the Little Theater, was originally written by Cuban American playwright Nilo Cruz and was published in 1998. It went in depth about the repressive Cuban regime of 1991 and starred LMC alumni Cesar Reyes as Lieutenant Portuondo, Neftali Jiminez as Victor Manuel a militia guard, Karen Hernandez as novelist Maria Celia Obispo and Alexis Moreno as pianist Sofia Obispo.

The chilling story about the repressive Cuban regime is personified in this play performed in Pittsburg Calif. The show was wonderfully done, because even though a majority of the people who saw the play may not have or will never go to Cuba, the audience gets to feel as though they were transported to Cuba in the early 90s.

The play started out dramatic and loud, with the lights dimmed and an eerie red covering the stage while Reyes and Jiminez shined flashlights at main actresses Hernandez and Moreno, screaming and swearing in their faces which sent chills down the audiences’ spine.

The show was dramatic, nail biting and romantic in a strange way. The romance that bloomed between the Lieutenant and Maria, a married woman, is toxic but so lovely. It truly is the forbidden fruit of relationships. The woman is longing for her husband and the Lieutenant reads her husband’s letters to her, almost making her feel he is there with her, so she slips into the man’s arms. The progression of their relationship is performed incredibly well by Reyes and Hernandez.

The actors that were on stage, whether for one scene or throughout the whole show, were amazing. Their acting compelled you to continue watching, sometimes with mild tears in your eyes, and other times laughing at the antics of the younger of the two sisters flirting with every man who walked on stage. The jokes landed, the heartstrings were pulled, this play covered the whole spectrum and then some.

While the Little Theater is just that, little, the intimacy of the audience being close to the stage worked well with this play. Watching actresses fiddle with plants right in front of the audience or climbing the “roof” to stand beside one of the front rows helped the audience feel that they were a part of the story even when not directly interacting with the performers. The close proximity to the stage creates a palpable sense of tension throughout the entire show.

Overall, the acting was great, the setting and stage were beautiful and conveyed the time accurately, and the story was intriguing to the point you could not help but be at the edge of your seat the whole time.

The cast was absolutely amazing, and I could not be happier with this being my introduction to the LMC drama program. I highly recommend any student or member of the community go to the next show called The Thanksgiving Play.