Killer ‘Kombat’ on PS4 and i0s 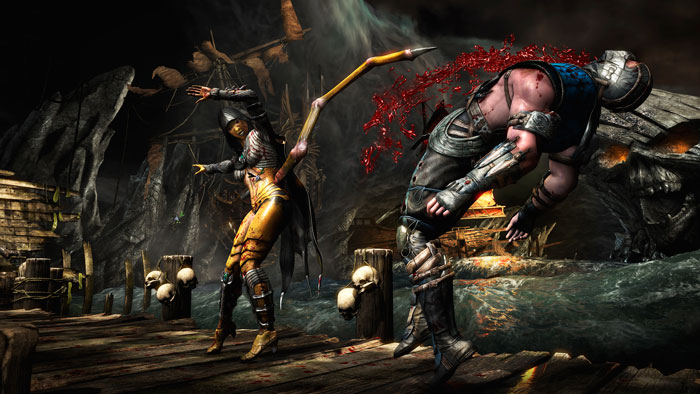 The newest installment in the Mortal Kombat universe, “Mortal Kombat X,” released April 14, has breathed new life into one of my favorite game franchises.

I hadn’t played a Kombat game for quite some years. My first experience was with the original in the early nineties. I played that game for years as a child, (I am a fully-functioning adult with no aggression issues by the way, gore be damned.)

I’m certain that my parents continued to purchase the games, as we once played as a family. It is a family game, anyway. But I really only remember the original. That being said, I lost interest for more in-depth games in my teens.

I was totally unaware that new Kombat games were being released on an almost-yearly basis. When the series reboot, “Mortal Kombat,” was released in 2011, it completely missed my attention. Maybe it was bad marketing, or perhaps I just wasn’t interested.

In a brilliant move, the creators of the game, NetherRealm Studios, released an iOS version of the game prior to the release for the larger platforms.

The app, which was free, pulled me into the universe once again. With vastly improved graphics, familiar players and a crop of newbies, I was hooked (pun intended).

While the app is only similar in looks to the PlayStation 4 version, it still allowed me to easily play on-the-go with no financial commitment. The app had features in it that were not in the larger game, namely the ability to upgrade players and gain new powers and capabilities.

Even though this feature was lacking in the full version, i was not disappointed in anything else in the full game.

The storyline picks up 20 years after the events of the 2011 reboot. There’s a new crop of fighters, most of them relatives of vintage characters that play along with the old favorites. Cassie Cage and Takeda are introduced as the children of Johnny Cage and Sonya Blade, and Kenshi, respectively, among others.

I don’t really play games all that often, and when I do, I generally do turn-based strategy games, like Civilization. That being said, the story mode of Kombat was pretty good. You play as various characters in “chapters,” combatting three or four opponents each chapter.

There are plenty of old throwbacks that fans of the series will enjoy, like the Krypt and the tower challenges. Each of which have features that are sure to excite, like the game modifying “Test Your Luck” portion, where as many as 7 modifiers are attached to the game. Modifiers include fiery floors, health bonuses, tilting floors and hyper-speed.

While the game itself is beyond reproach there are a couple small changes I would have made to make it more realistic.

The X-ray attacks that each player can do at some point in combat are very violent (great) and extremely graphic, (even better) but the depiction of the move always seems to indicate that someone would die from the attack. That is not the case, most of the time, you could reduce a health bar by half.

Perhaps there could have been a setting that disabled the X-ray attack until such a time as it would K-O an opponent.

The only other thing I would have added into the game was some way to tie the iOS app into the PS4 version. I had spent a lot of time and effort on my handheld device building up a team of players, and a tie-in would have made it all the more worth it.

All being told, this game is a killer and well worth the time it takes to rub a few pennies together. It makes other, similar fighting games look like garbage. It’s the fastest-selling release in the Kombat universe, and with good reason.

The game, which is available for $59.99 at most stores, is playable on iOS, Andriod, PS4, Xbox One and Microsoft Windows.

My official rating is 10 out of 10 dismembered elder gods.