The ‘Devil’ has come to Antioch 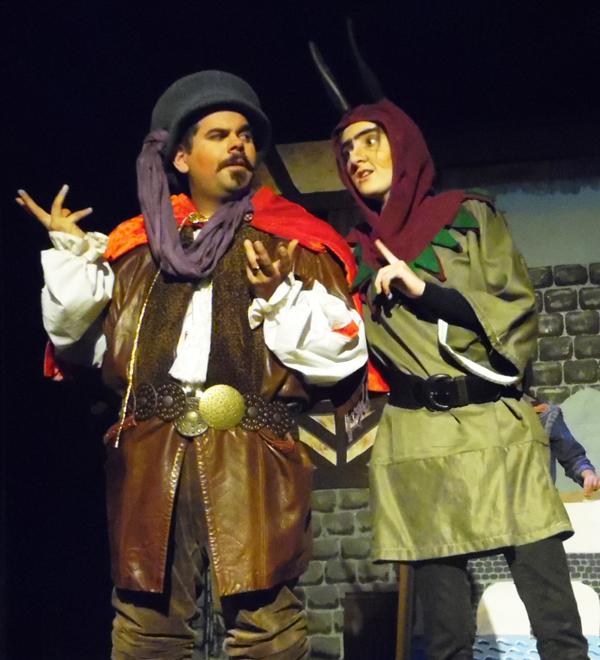 A deal is discussed between the Lord Mayor, played by Olivier Levasseur, and The Devil, played by Presley Aragon.

“Expect the unexpected,” said John Ballesteros, director of “The Cat and The Devil,” a play adapted from the short story by James Joyce. Produced by The Drama Factory, the play premiers tonight at the Nick Rodriguez Community Center in downtown Antioch.

Featuring an all ages cast, “The Cat and The Devil” promises to delight audiences with its short two-act performance based on the classic children’s book.

“It was one of my favorite books as a kid,” said Ballesteros, admiring how the Devil is portrayed as “the good guy.”

Taking place during medieval times in Beaugency, France, the story tells of a deal between the Devil and the town’s Lord Mayor for a bridge to be built, replacing a ferry that had been lost in an incident. The Devil’s price for the exchange: “one single solitary soul.” And according to the Devil, portrayed by Presley Aragon, “anyone would do.”

Although adapted from a children’s book, “the play is based on actual places and happenings,” according to the official program, taking place during the time of the Black Plague, a time when “people turned to superstition and mistrust in hopes of beating the odds.”

In a whimsical performance, Olivier Levasseur plays the part of the Lord Mayor. A vain character with a desire to get things done, receive personal recognition, but not get his hands dirty in the process. Passing the duty of providing the soul to be delivered to the Devil, the Lord Mayor assigns the Town Magistrate, played by Halide Porras, to locate the unlucky individual.

Featuring a soundtrack with pieces by Michael Praetorius, elaborate costumes depicting the era and vividly designed scenery, audiences will have no choice but to immerse themselves into the production as the performers grace the stage inside the tiny theater.

All ages are welcome with general admission for $10 and $8 for senior citizens. For more information on The Drama Factory and upcoming performances visit www.dramafactory.org.