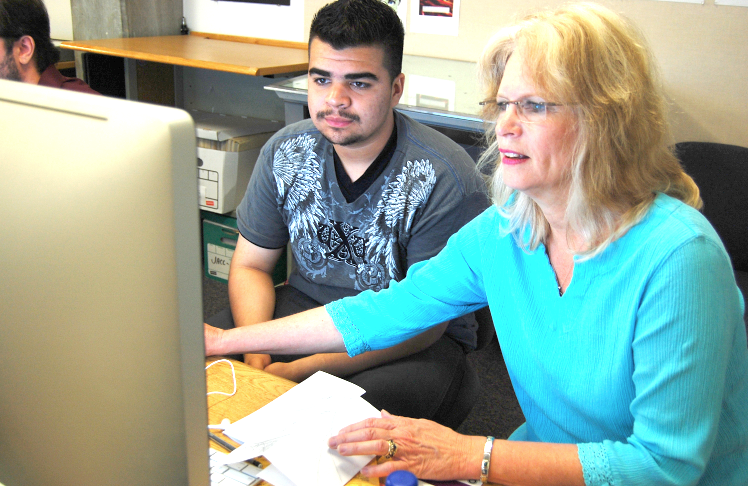 “I love what I do,” said Rebecca Talley, artist, creative director and professor. She’s been teaching at Los Medanos College for 15 years. LMC offered her a job while she was a creative director for a publishing company in Walnut Creek. “We need somebody that has real world experience,” Talley said they told her.

At first, Talley was disinterested, saying she didn’t have enough time in her busy schedule. Reluctantly, she came to the campus to see what it was like.

“I fell in love with the size, the students and the energy of the department,” Talley said excitedly.

She was hooked and started with just a night class once a week, but her schedule has grown over the years to as many as five classes per semester.

“The creativity is wonderful and can be contagious,” Talley said.

When she finally taught day classes she loved teaching even more, and explains how it was a much different from teaching night classes.

“When I taught day classes it was a younger group, I loved the energy,” Talley said energetically and with a smile on her face. “Art is my world.”

Her blonde hair and light blue eyes go with her positive attitude. She believes young people should be given a chance in the art industry and be able to get a foot in the door, just as she did when she was a student.

Talley started in college as a graphic artist for a company called Armstrong Publishing.

“That is why I try to give students intern positions,” she said.

Talley gives one student per semester a chance to intern at a real world company and currently has four students still at their intern jobs. Three out of the four internships are paid positions.

“The student that isn’t paid, thanks me weekly for the knowledge they receive,” she said.

Talley talks about her own family and how they are also immersed in art 24/7. While growing up, her father and mother were both artistic and influenced her from the start. Her husband and son are musical, though Talley admits to not having that particular gift. She said when her son was just 4 or 5 years old she was singing to him and he stopped her and said, “Mom that’s not on key.”

Despite her lack of musical talent, “I love music and it is forever going in my classes and at home,” she said.

Talley always dreamed of being a teacher when she was young.

“My two ambitions were to be a ballerina and a teacher, so I decided to let the ballerina thing go.”

And she always knew she was supposed to be an artist.

“It was never a question what field I would be in,” she said.

You wouldn’t know it from Talley’s campus persona, but she is a political person.

“I’m the Cal state representative for the National Organization for Women. I’ve always been an advocate for women’s rights and equal rights,” she said.

She was elected into the position and believes equal rights are an idea worth making people aware of.

Talley’s family originates in Missouri, but she was born in Ohio. From there she moved to Texas, which is where she received the accent you can still hear when she speaks and attended The University of Houston.

“They have a huge art department,” she explains. To an artist, University of Houston is like being a kid in a candy store because there are so many classes available and so many different professors and instructors.

While Talley was a junior in college she was offered a job as a graphic artist and said she learned from the ground up how a book is made.

Armstrong Publishing loved her artwork and was encouraging about her talent, but said modestly, “They were just glad they had someone creative.”

Talley claims that even her hobby is art. She lives and breathes it all sorts.

“I probably draw more than anything,” she said. “I always have a project in mind.”

This southern bell gives out positive vibes to LMC’s art department and continues to help students get ready for the real world of the art industry.