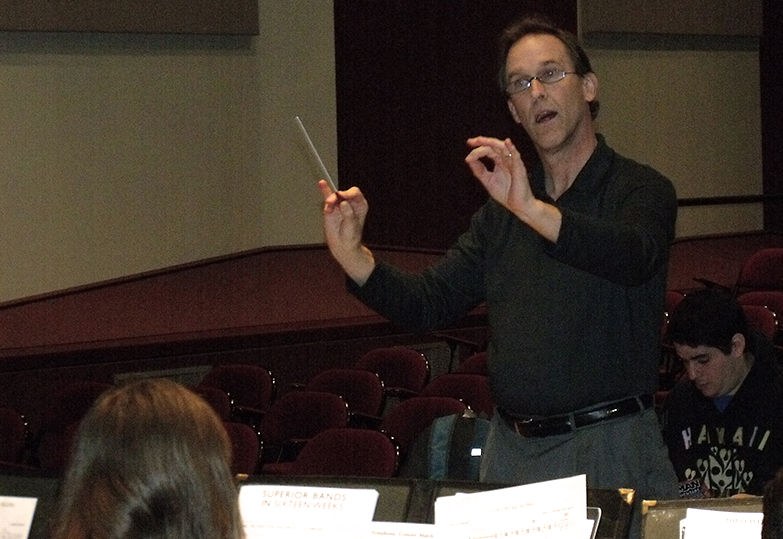 “I’ve known it was music from high school. My dad was a physicist, and I was really interested in all things scientific when I was growing up. But I soon discovered that I wasn’t good at math. They say that if you are good at music you are going to be good at math too, but that certainly isn’t the case,” said Dr. Jonathan Knight, Director of the Los Medanos College Concert Band.” “You can definitely make it in music without being good at math. But in science, you better be good at math. So I said, you know what, I’m not going to kill myself with this. There were other subjects I liked, but I always knew it was music.”

Knight’s musical journey began in fifth grade when he took up learning the trumpet, and he never looked back. He turned from a kid who was on the shy side growing up, to confidently playing the trumpet professionally and eventually teaching and conducting here at LMC. One of the overriding things you notice about Knight when you talk with him face to face is his quick-wittedness and his overall charming and calming demeanor.

He grew up in “Berzerkely” along with his sister who was seven years older than him. His parents were music lovers and always had a tune playing over the stereo. His sister also happened to be an accomplished pianist, who put him quickly to sleep as a kid when he heard her practicing. Nothing can put a kid to sleep like the calming and gentle pecking of some black and white ivory keys.

As the years went on his love for music only grew. He earned a B.A. in music at Berkeley, his master of management degree at the New England Conservatory in Boston, an independent music school, and his doctorate at Stony Brook University in New York. Knight spent a solid dozen years away from the west coast, splitting 10 years between Boston and New York, and another two in Iowa for work.

Knight enjoyed his time on the East Coast, he said, “I was happy to come home. It was a great adventure being out there. I don’t regret not staying out there, if work led me to stay there, then so be it, beggars can’t be choosers.”

The music industry can certainly move you all around the globe, but it ended up working out, he met his wife during his five-year stay in Boston. Knight, his wife, and his three children, ages 9, 6, and 4 at the time, moved back to the West Coast after a brief stay in Iowa because some opportunities presented themselves out here, although not all of those opportunities panned out. A friend of his wanted to start a professional wind band. Unfortunately, the business plan was a bit faulty, and the whole idea went kaput after a while, despite Knight’s best efforts to keep it alive.

But one day, a group of alumni from Cazadero Music Camp, a music program for youth ages 10-18, united and restarted the camp. It had been “dormant” for several years, according to Knight, but since he went there as a kid, it provided some extra motivation for him and the other alumni to get it going again. Nowadays, Knight is the assistant director for the camp and teachers there every summer alongside his wife.

The summers spent in Cazadero prove to be the most relaxing for him throughout the year. When Knight is not actually teaching or making music he is at least practicing or thinking about it which provides for little free time. He does, however, enjoy the occasional Giants game, and also cooking for his family, although he says, “I don’t feel like [a cook] most of the time, but I enjoy it.”

If anyone has ever gone and seen a concert at the school you realize that Knight always has his troops ready to play.

“A rehearsal is different than a performance. In a rehearsal it is myself, the music, and the musicians. You need to at least get the music to work. In rehearsal you have a sense of where you are with it, and you practice in order to get where you want to get with it. It sort of like game planning or coming up with a strategy.” Knight added that, “There is no strategy in the actual performance. Once I am done being a little bit of an emcee for the audience, I am totally focused on the music as an entity rather than a plan for what I want to accomplish.”

When it comes to conveying the emotions of a particular piece to his band Knight explained, “Somebody once said that ‘talking about music is like dancing about architecture.’ It is one of those things that is hard to put into words. But, dealing with the emotional content of music can be somewhat subjective. Not that you can be wrong about it, but if you sometimes try and put it into words it can come out stupid.” He says that he has to shape what is already going on and keep in mind that he is not the one making the music, it is ultimately the musicians.

Aside from all of his activities at LMC, Knight still plays trumpet professionally. He one day hopes to be the principal trumpet on Mahler’s 5th Symphony with a good orchestra, or perhaps conduct it with a good orchestra. Mahler’s 5th is one of the greatest works of symphonic music that features a glum sounding trumpet solo and is overall about an hour long. But, no one can get there without having some gigs go a bit array.

Knight says that once you get to a professional level, the gigs themselves hardly ever crash and burn, but sometimes the circumstances around the gig can be troublesome. “In Iowa, I played with the Cedar Rapids Symphony for a couple of seasons. I used to carpool with one of the horn players to the concert hall, which was about 60 miles away. One time we were on our way, she was driving, and quite a blizzard was going on. I had my head hanging out the passenger window so that at least one of us could see the road. I was pretty much telling her which way to go because of the white out conditions. The start of the concert was held up because they knew we were on our way and, as you could imagine, there was quite a small audience on hand.”

The music industry is a bit of a tough customer. Of course you need to actually be good at your craft, but you also have to get a little lucky and hope that the doors just open for you. Embarking on a music career is something that requires your full love and constant undivided attention to, otherwise you will just get lost in the fold.

“What I usually tell someone who asks me whether or not they should embark on a music career is…don’t do it, unless you can’t stand the thought of doing anything else. If it is really your passion, do it, but if it doesn’t grab at your heart strings, then I wouldn’t do it. It takes that kind of commitment,” said Knight.

Steve Ernest, the Symphonic, Jazz, and Concert band director at Heritage High School said that Knight is a “witty, considerate and hard working musician who not only plays the trumpet, but is also a wonderful conductor. He added that when working with Knight he always “elevates his musical game to keep up with him and enjoys the insights he brings to music when they work together.”

Knight has accomplished the basics of what he has set out to do in his life. He has been musically active his whole life in playing trumpet professionally as well as teaching music at a college level. But, regardless of what you have already accomplished, he says you must always keep striving.

“When you accomplish one goal you really ought to have another, because otherwise you really just lose interest in what you are doing,” stated Knight.