‘Pi’ takes you away (Review) 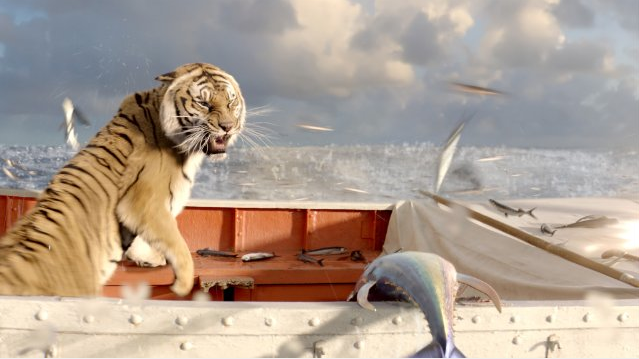 Pi is an Indian boy that explores spiritual and practical issues at an early age. He survives 227 days after a shipwreck had him stranded on a lifeboat in the middle of the Pacific Ocean with a Bengal tiger named Richard Parker.

Yann Martel’s best selling novel “Life of Pi” is brought to life by 20th Century Fox. Director Ang Lee takes you on an epic adventure across the biggest sea in the world.

Pi is a fearless boy with affectionate ambitions. He is forced to move with his family from India to Canada after they sell their zoo. They board a Japanese cargo ship with some of their animals, and sail across the Pacific. During its voyage a giant thunder storm capsized the ship. Pi, Richard Parker, a zebra, a hyena and an orangutan were the only to survive as Pi’s family and the rest of the passengers sunk to the bottom of the ocean.

Later on after the terrible storm Pi and Richard Parker were the only ones to survive and they both found refuge aboard the lifeboat. As the days went by Pi’s mission was to find a way to get Richard Parker to trust him if he wanted to stay alive. Pi’s faith in God pushed him to survival.

Only a few movies will leave a lasting impression and “Life of Pi” will do just that. It is perfectly directed by Lee, and he made sure there wasn’t a boring moment in the movie. Is it real? Is it? The animation in this film is amazingly realistic. The effects are some of the best I’ve ever seen. It is a must see movie, it is definitely worth 127 minutes of your life. It was a powerful performance by a solo actor (Suraj Sharma), that only talked to digital effects.

The Pittsburg’s Maya Theater features the first Dolby Atmos audio system in the area. Maya Cinemas is 1 of 21 movie theaters worldwide to have this sound system. With the 3D sound and the state of the arc special effects you don’t only watch the movie, you are in the movie.

Upcoming movies in Dolby Atmos are: “The Hobbit: An Unexpected Journey” and upcoming in 2013: “Star Trek into Darkness.” .