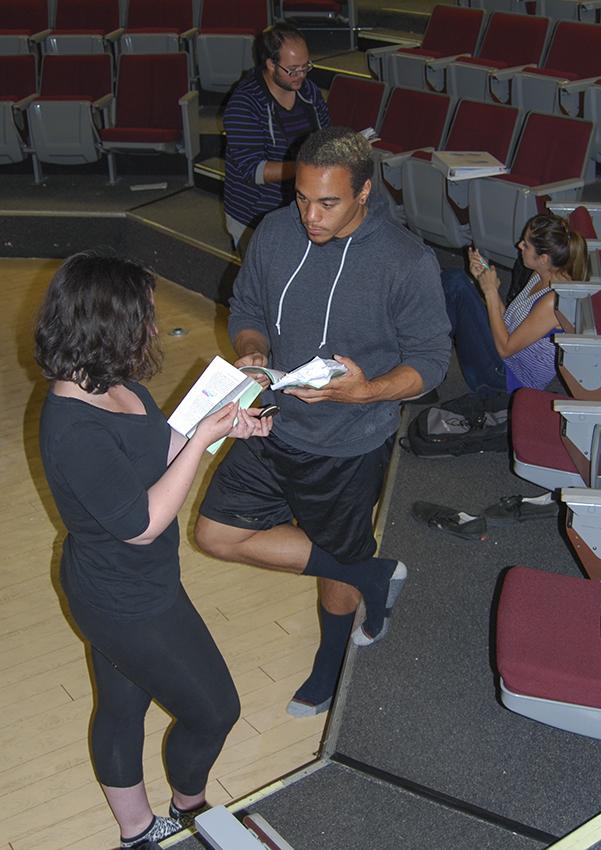 Los Medanos College Drama Department will give people a reason to cast off from their routines of small screen, big screen and all other forms entertainment with their rendition of “Rough Crossing” written by Tom Stoppard.

The maiden voyage is on Oct. 11 and will represent weeks of effort from the captain of the play, director Sean J. O’Neil. O’Neil has watched over the play since September, and still finds reason to laugh as his actors prepare for the upcoming performance and believes the play will entertain audiences as well.

“Take a break from all the very real, very serious, ver y difficult problems we all face and join us on board our cruise full of tongue-trip- pery and trip-uppery,” said O’Neil.

If the thought of “tongue-trippery and trip-uppery” had you taking a moment to ponder what that might mean then in O’Neil’s mind you have just experienced part of what it means to attend a live play — the anticipation.

In this play O’Neil believes the humor will spring up from quick-witted conser- vation, word play, misdirection and mischief all designed to keep the audience guessing and cresting toward a wave of laughter the actors on stage hope will come.

“You have to hit the peak of the audience’s laughter and wait until it fades because that is when they are back with you again,” said O’Neil.

The exchange of anticipation and tension between the actors and audience is what creates the electricity of live theater to O’Neil. He explained the audience waits for that next big thing to make them laugh — the funny word, movement or seemingly awkward pause, while the actors wonder if they will hear the sounds of mirth bubble up from the crowd.

LMC actor Bethany Robinson will por tray the character Alex Gal, and believes what will draw the audience’s attention to “Gal” is not just for what they will see on stage — but the character’s backstory that she will offer glimpses of while performing.

“The character, Alex, is replacing things in her life with food and it is funny to see how she is doing it,” said Robinson.

Her fellow cast member Mario Castillo believes his character, Sandor Turai, to be the “glue that holds ever ything together,” but alluded to the fact Turai continually feeds off of another character who may well be the star of the show to some who attend the play.

LMC Actor Sonia Azizi feels her own character, Natasha Navratilova, will bring a sense of a dramatic soap opera to the stage in an elegant movie star fashion. She added that the, work is a play about

a play that will allow the audience to catch glimpses of how they bring a script to life and how they respond to their characters as they discover them.

Nick Garcia, head of LMC’s Drama Department, hopes the audience will not only be captivated, but that the actors themselves will be engaged by both the play and the college’s acting program.

“My goal is to create a dynamic and exciting event that’s fun for ever yone, (and) to develop a premiere acting program that showcases the

talent of our actors,” Garcia said. O’Neil’s ultimate hope for the play is that

it will be something the audience will enjoy. “My goal is to entertain people. It is not the most socially significant play ever written, but